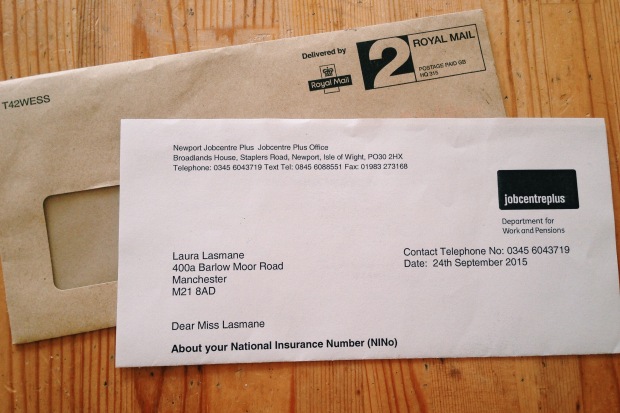 Once you move to another country and start your life from scratch there, you have to be prepared for a lot of bureaucracy. Luckily, I’m a citizen of the European Union, which allows me to skip a lot of paperwork and other mess. However, there are things you just can’t avoid when you move to the UK, and the very first of them is – getting your National Insurance Number.

Why Do You Need A NIN?

If you intend to work in the UK, you can’t do without a National Insurance Number (NIN). Your NIN will identify you and ensure that the government records all the contributions you make towards the UK social security and state pension system.

If you are in a situation when you have already landed a job (unlike me), you will need to get that number before you get your first salary. If you don’t do that, you risk of overpaying taxes without the chance of claiming them back once you have the NIN.

But guess what? The process takes weeks and you can only apply once you’re in the UK. As I am still in the process of getting a job, I didn’t have to stress about it too much, however, this is a process you would want to start as soon as possible. Also, for me, it was needed to have a proof of address.

Proof of address is another thing one will need around here, as everything seems to be mail-based. Even the employers send their official job offers via mail! Brits love the mail! Or so it appears… It might seem that such means of communication should gradually disappear from our daily lives, but Brits are doing their best to keep it alive. Is preserving Royal Mail part of their identities?

The Process Of Applying For NIN

Everything is quite simple – you pick up the phone, make a call, arrange an appointment for your NIN interview, and prepare all the documents needed (detailed information here). I made the call on Thursday and got an appointment for Saturday. Things moving quickly? Not so fast!

For the interview, I was told to bring an ID and… funny enough, a proof of address. I didn’t find anything like that on the government website, so I decided to play dumb if asked. After all – the NIN letter I will get was to be my proof of address!

Some resources say you need some kind of proof that you have a job if that’s the case. Or if not – job rejection letters, letters from recruitment agents. Not true. Others write that you’ll have to give a detailed account on all your past years of work and travel. Also not true. Possibly, this experience might differ for others (I’d love to hear those stories!).

The interviews take place at the Jobcentre Plus, and you can find branches in every neighbourhood. Mine was just a 3-minute walk away, however, I had to commute to the other side of the city to a different one. Apparently, they don’t do the interviews in just any Jobcentre.

The interview itself seemed weird to me. I was ready to answer tricky questions about my intentions to live in the UK, but they were not bothered by that. They wanted to know all the addresses where I’ve have lived in the UK, if I am married, if I have ever had any other names, and whether I intend to change my name. The last two questions were asked twice. And no proof of address!

I also needed to fill out a simple form, get my passport photocopied, and I was all set. All I needed to do was to wait patiently for… a letter, of course! The wait might take up to 4 weeks, but I got my number 3 weeks after my interview.

“One of us!” said my friend when I announced the ‘big news’ of getting a NIN. Yes, I must admit – I feel more local now, haha. But this is not the end of my dealings with British bureaucracy. More about it in other posts! Welcome to my blog! I’m Laura. Here I share my dream-chasing stories, adventures and inspiration. No unicorns.

We’re utterly heartbroken but happy that we had the chance to say our final good-byes and spend a beautiful weekend together with our beloved fur baby Drizen. He had some nice walks down his favourite trails, a little paddle in the lake, an accidental doggy date, and, of course, endless supplies of belly rubs and treats. Unfortunately, his health was failing more and more with each month, week and day… It’s been a bizarre decision to make, but we feel it was best for him to go now while he can still enjoy his time instead of stretching out his suffering to a bitter end. I am beyond honoured to have met him and be his dog mom, even if it was for a couple of years. What a kind, gentle and beautiful beast he was! Such an amazing personality, you could not wish for a better dog. Drizzle pops, I’ll miss you so much! And thank you so much for opening your heart to me… Without you I wouldn’t be in Switzerland, and for that I’m forever thankful ♥️
2️⃣0️⃣1️⃣9️⃣, what a year you’ve been! With some of the lowest lows, there is still so much I’ve managed to do, see and experience despite it all 💪🏼 And, most importantly, I made it! I’ll start with the top nine of your favourite photos... And no surprise there - they’re all from my hikes out and about in our backyard. What a beautiful place this is to live, still can’t quite believe I get to call it home 🖤🇨🇭 Hopefully, for a while longer, because there’s so much more to explore and see. And then you, @lcdchase... We’ve had some awesome trips and great adventures together. Thank you for taking me along, for pushing me (even though I react with throwing a little strop sometimes), for teaching me, and for putting up with everthing that comes with me. And then there’s some other favourite humans that I have the honour or having in my life. Thank you for your support and the quality time. This post wouldn’t be complete with some appreciation for my little furry monkeys. Love them to the moon and back, my little therapy animals. And then some more moments where I managed to enjoy myself and this wonderfully confusing thing called life. More of all this please! All in all, 2019, you sucked really bad, but you also reminded me more than anything of all the things that REALLY matter in life. 2️⃣0️⃣2️⃣0️⃣, you better be GOOD!!!
I don’t want a lot for Christmas... This is exactly what the ‘doctor’ prescribed, needed this like a breath of fresh air ❄️
Not sure if it’s the year-end or winter depression, or maybe it’s the same old one I’ve had for most of the year and it’s just been lurking in the shadows waiting for yet another ‘perfect’ moment to jump at me yelling SURPRISE, but it’s been so damn hard to leave the house lately. I keep promising myself that I’ll do better, make big plans on how that will happen, but I fail every single time. So most days I do not know what to do with myself, and just end up sitting on the sofa all day. Big achievement if I’ve managed to read a chapter or two of a book. In summer, it’s so much easier to be. There’s way more sunlight and energy floating around, and there’s way more days and hours of work, so way less time to sulk around and be depressed. I know, fucking excuses. Or are they? On one hand, I let myself enojoy the thick black cloud engulfing my daily existence. There’s something safe and comforting about not being able to leave the house. All you have to do is just enjoy the safe environment and wait for the moment when you can officially, without guilt, curl up in your bedsheets after dark. On the other, I keep beating myself up for not doing anything better with my life. As if that will save me from my misery... I know it most likely won’t but what if it does this time? So I promise once again to do better, to be better. Sometimes I actually leave the house and go for a dog walk, or like today - take a bike ride. Seems like an easy task, but there’s so much effort behind all that. I’m not perfect, as much as my perfectionism would like it otherwise. So all I can do is wake up every morning with the hope that today I will not only try but also achieve something. And if I don’t, that’s OK too. Maybe the day will come when I’ll wake up unbroken... maybe. All I know now is that I want this year to be over at last. Maybe 2020 will be nicer to me 🤞🏼